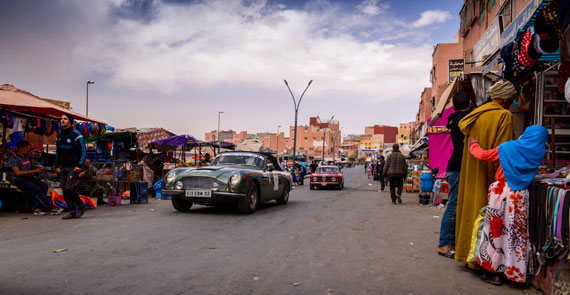 Uncommon departure for this 26th edition of the Rally Morocco Classic, from Marrakech and Mamounia.

The competitors took the road to Amizmiz and lake Lalla Takerkoust, gigantic water reserve for the region. At the exit of the Red City, as the course progresses towards the foothills of the Atlas, snowy in the distance, into the authentic Morocco.

This unique itinerary took the competitors to the heart of the Agafay desert, where the first regularity event of the rally took place. 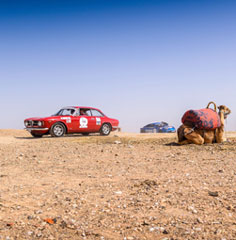 The clutch of the BMW 1600 crew LEVIE & DEWOLF suffered difficulties before lunch at the bivouac Terre des Etoiles, peaceful area, located on top of a hill with a 360 degree view of this desert of rocks and pebbles dominated by the giants of the Atlas.

Then everyone took the road to Agadir by a fairly rolling secondary road and then by the former main axis connecting Marrakech to Agadir, which was also the playground of the participants who were able to enjoy a sinuous and fast road.

Arriving at the second special stage, announced as a sinuous regularity test with several changes of direction, has been disorientating some competitors, in particular the crew NICOLY & NICOLY, with their Jaguar MK2 making all the stage on the opposite way! While others see their stage disturbed by some goats crossing the road! 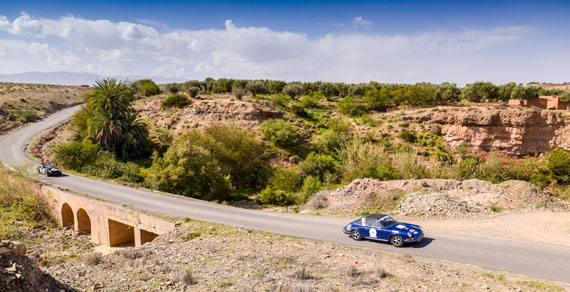 First severe mechanical issue for Porsche 911 of the former winner of the 25th edition of the Rally Morocco Classic which will continue the rally at the wheel of a new vehicle.

It was then time to reach the Atlantic Ocean and the Riad Villa Blanche welcomes us for the evening at the end of this first stage that will have put the machines, drivers and co-drivers “in shape” to face the rest of the Rally.